January 20th through February 3rd marks the time of大寒 Dà Hán, or Major Cold, the 24th and last term in the Ancient Chinese solar calendar, which means that the next term will start a new annual cycle.

大寒 Dà Hán, or Major Cold is also the last of the winter terms. Some of the Northern Hemisphere will experience the lowest temperatures of the year during Major Cold.

Since time immemorial the Ancient Chinese made sure they had sesame stalks stored during the period of Major Cold. The stalks were later placed on the floor and the children of each family were asked to crush them with their feet on 除夕 Chú Xī New Year’s Eve while wishing for a safe and sound year.

“Rise joint by joint like sesame flowers on the stem.” -which means “making steady progress in thought, studies or skills”

As Major Cold is the last winter term and the last term of the entire cycle, for the Chinese people it means that a new year will commence shortly and it is time to start preparations for all the upcoming festivities, celebrations and the fast approaching season of spring!

It is important not to rush things and to allow the cycle to fully finish and the body to fully complete its process. Patience is key here. Continue guarding your body from the cold and avoid overexerting yourself with any physical projects.

Go to bed early and get up late, which will in turn help you with a smooth and invigorating transition into Spring when it is time.

Remember to get your sunlight and oxygen during the safe times. This time of year often promotes excessive dryness – drink your distilled water to guard against dehydration!

Keep practicing your Dao Yin Exercises and the Way of Softness. Low impact, high energy = lasting results!  This will maintain smooth circulation of Qi and Blood in the body.

The Three Friends of Winter

“For his residence, earth was piled to form a hill and a hundred plum trees, which along with lofty pines and tall bamboo comprise the friends of winter, were planted.”

The above is a famous writing from the Song Dynasty and the first reference to 岁寒三友 Suì Hán Sān Yǒu The Three Friends of Winter in Record of the Five-cloud Plum Cottage (五雲梅舍記) from The Clear Mountain Collection (霽山集) by Lin Jingxi.

Bamboo, pine, and the plum tree are referred to as the three friends because they do not wither during winter and in China they embody thriving during adverse conditions.

The pine is said to personify longevity and endurance. The bamboo represents durability and flexibility as it will bend but not break.  The Plum Tree exemplifies renewal as it is the first flower of the New Year.

May you continue to balance and harmonize yourself as we transition into 大寒 Dà Hán. Stay warm! 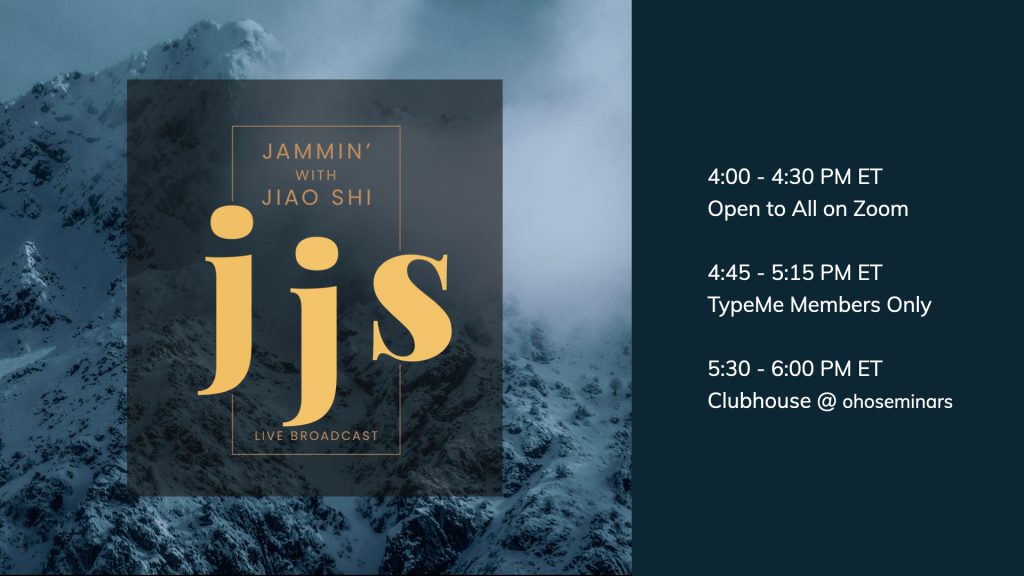 And join us for Jammin’ with Jiao Shi, on January 22nd at 4:00pm ET for ALL, 4:45pm ET for TypeMe Community Members, and 5:30pm ET on Clubhouse @ohoseminars. See you there!