May 21st through June 5th marks the time of 小满 Xiǎo Mǎn, translated as Small Full Grain and sometimes Lesser Fullness Grain, the 8th term in the Ancient Chinese Solar Calendar. It is also the second solar term of the summer season.

One of the English translations of 小满 Xiǎo Mǎn is ‘Lesser Fullness’ as it applies to grains. Certain grain crops fill up and become plump by this time of year, however, they are not yet fully mature. They are almost ready for harvest but still need to complete their ripening process.

As previously mentioned, each of the 24 solar terms is further divided into 3 pentads and 小满 Xiǎo Mǎn, is no exception. The 3 pentads for this season are:

One of the distinct characteristics of the 小满 Xiǎo Mǎn is heavy rainfall which causes rivers to rise and waterfalls to fill. High humidity and heat are also observed during this time of year, especially in the Southern parts of China.

The Foods of Summer

Wide varieties of fruits, grains and vegetables are reaching full maturity and are being harvested at this time. It is traditional to enjoy locally grown and freshly picked seasonal foods. Fire is the element that rules over the summer season and as such it is recommended to add bitter flavors to your meals. 小满 Xiǎo Mǎn also brings joy to all the cherry lovers around the world as they are fully ripe by this time and are widely available for consumption.

Silk is one of China’s most important exports. It even led to the formation of the legendary Silk Road during the Han Dynasty (206 B.C. – 220 A.D.). Prices often match its weight in gold.

A silk cocoon has 1,000 – 1,500 meters of silk in it. Incredibly, a single manufacturing facility in Shengze town produces ten billion meters of silk annually. Each year during the小满 Xiǎo Mǎn solar term the Chinese people hold various spiritual festivities where they honor the Chinese empress and wife of the Yellow Emperor 西陵氏 Xi Ling-Shi, celebrating the silk cocoon harvest.

Time was long before I met her, but is longer since we parted
And the east wind has arisen and a hundred flowers are gone
The silk-worms of spring will weave until they die
And every night the candles will weep their wicks away
Mornings in her mirror she sees her hair-cloud changing
Yet she dares the chill of moonlight with her evening song
It is not so very far to her Enchanted Mountain
O blue-birds, be listening! Bring me what she says.

With time and patience the mulberry leaf becomes a silk gown.

Silk production is a highly intricate activity involving silkworms and entire gardens of mulberry trees. Mulberry leaves are the primary food source for silkworms who consume large quantities of leaves prior to turning into cocoons.

To help with turning worm cocoons into silk thread more than 2,000 years ago, the ancient Chinese created a spinning wheel. The first spinning wheel did not surface in Europe until the 13th century.

There was also a brocade machine invented and built during the Song Dynasty (960 – 1279). The structure is made from thousands of bamboo and other wooden parts. It requires two people to operate and is still in use today. Only 5-6 centimeters of the Song Style Brocade can be woven on this machine in one day. It is now a national cultural relic.

The Song Dynasty Style Brocade is an integral part of the exquisite silk culture of China and an exceptional masterpiece of traditional Chinese silk art. In 2006 Song Brocade weaving skills were included in the first batch of national intangible cultural heritage.

The second festival during 小满 Xiǎo Mǎn is the 端午节 Duān Wǔ Jié Dragon Boat Festival or Double Fifth Festival. This traditional event has been celebrated on the 5th day of the 5th month by the Chinese people for the last 2,000 years.

In September 2009, UNESCO added the Dragon Boat Festival to the Intangible Cultural Heritage list, making it the first Chinese festival to receive the honor.

People enjoy a 3 days of celebrations with dragon boat racing. It is also a time to “ward off evil spirits, diseases, pests and other poisonous animals by hanging calamus and wormwood, wearing perfume pouches, drinking realgar wine, and bathing in herbal water, etc.”

Modern dragon boats today are long and thin, and typically have 20 paddlers. A drummer faces the paddlers at the rear of the bow of the boat leading the way.

And not surprisingly there could be no popular festival without customary foods to enjoy on such a special day. 粽子 Zòngzi, a pyramid-shaped dumpling made of glutinous rice, is stuffed with various sweet or savory fillings as a customary dish to enjoy on the day of the 端午节 Duān Wǔ Jié Dragon Boat Festival.

And that completes our insightful journey through the 8th solar term 小满 Xiǎo Mǎn, or Small Full Grain.

May you continue to balance and harmonize as we transition into小满 Xiǎo Mǎn. Stay active! 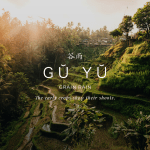